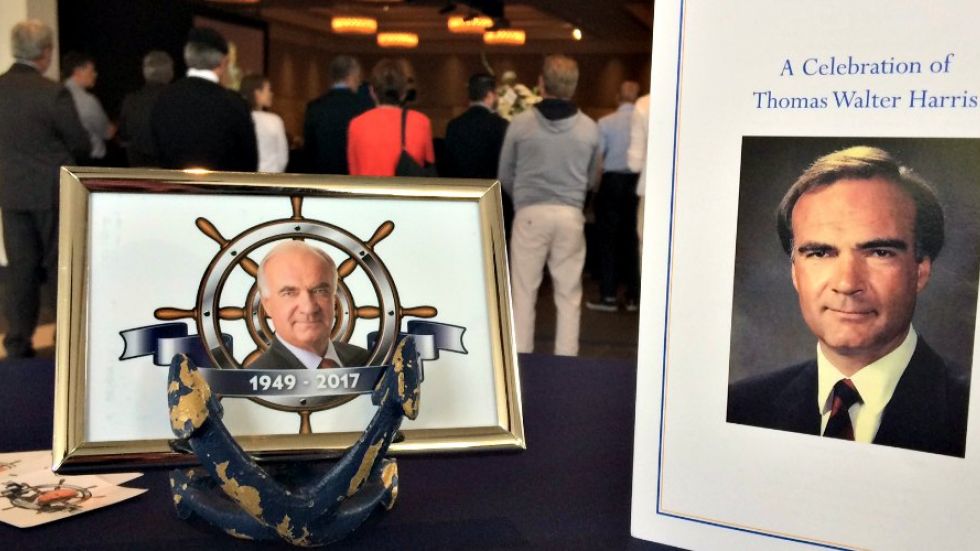 NANAIMO — On a weekend dedicated to celebrating Nanaimo’s heritage, it seemed only fitting to honour the life of a man woven into the very fabric of the harbour city.

More than 1,000 people paid tribute to philanthropist and businessman Tom Harris at the Vancouver Island Conference Centre on July 22, seemingly putting a pause on Bathtub weekend festivities going on around the downtown core.

Harris passed away unexpectedly while visiting a friend in Roche Harbour on San Juan Island, Washington on June 29 at the age of 67. Harris and his wife Christine have five children and 12 grandchildren.

He was eulogized by his two sons, Mike and Tony, in front of a room filled with dignitaries, at least three Nanaimo mayors, business and community leaders. Harris’ daughter Stephanie, flanked by her two sisters, read a moving poem called I Am One of the Lucky Ones which she had written for him last Father’s Day.

Mike Harris spoke of Tom’s love of skiing, both on water and snow, his passion for boating and the family cabin on Mudge Island. A common theme focused on Tom’s love for his family and his community. His sons remembered their father’s affinity for the work of Dr. Suess and his ability to recite those books to his grandchildren without looking at the pages.

“This lesson about the delicate, precious balancing act of life was something dad embodied and instilled in all of his children,” Tony said.

“Dad took great pleasure and had a lot of pride in his many business partnerships and our teams. Dad’s business grew as a direct result of the passion he had for helping other people grow. He loved encouraging people to reach higher. Invariably, helping others was mutually beneficial. This is what we see as his greatest success.”

Father Brian Evans, Tom’s pastor at St. Paul’s Anglican Church, said Tom didn’t help people to see his name on the side of a building or on a plaque. “Rather he would roll up his sleeves and work beside you towards the goal…When he spoke about his family, he lit up. When he spoke about this community, he lit up,” Evans said.

Michael O’Connor, Tom’s best friend for more than 50 years, fondly remembered his first meeting with a man he described as a “gregarious chap with a big smile, a warm friendliness and huge presence.”

“During Tom’s lifetime I spoke to him daily and I still find myself continuing those conversations with him…My wife will often say ‘who are you talking to?’ I simply say, ‘I’m just talking to Tommy,'” he said.

O’Connor said Tom often spoke about his weekly visits with his mother Evelyn, as well as the ritual of the Harris Family Friday Lunches.

“I always knew he was going to Evelyn’s to a lovely bottle of scotch and lots of ice. He particularly enjoyed showing pictures of all of his grandchildren to her.

“His business acumen and success was based on strength of character and conviction…Tom did not make his financial success on the back’s of others, he did it himself. He was also going to give back and share his successes. He was a man who never forgot his roots and he always remembered he had a duty to this community,” O’Connor said.

Moray Keith, president of Dueck Auto Group, told the crowd Tom’s strong leadership guided B.C.’s auto industry through some of its roughest patches. “I like to think I kept him out of jail a few times. There was more than once he wanted to choke a wayward politician,” he said, chuckling with the crowd.

“I’m not a religious man, but I believe in God. I like to think the big guy decided he needed help. True to character, Tom obliged,” Keith said.

In honour of Harris’ legacy of community service, the Tom Harris Community Endowment Fund will continue to support many of his favourite causes. Donations can be made via the Nanaimo Foundation.