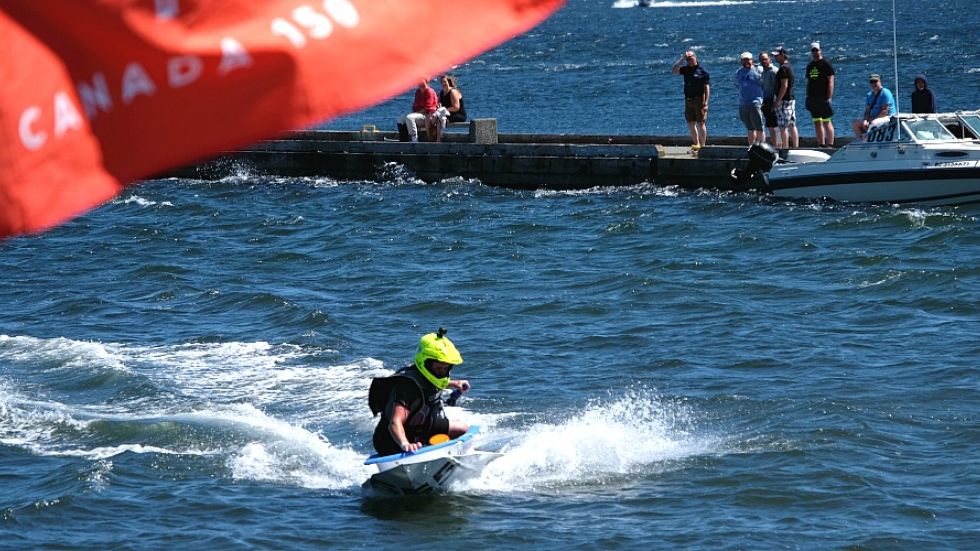 NANAIMO — Choppy waters made for one of the longest bathtub races in Nanaimo history.

It was nearly two-and-a-half hours before Brandon Leigh, racing for the Harris Auto Group, made it to shore at Maffeo Sutton Park, shakily ran up the stairs at and rang the bell at the finish line on Sunday.

Leigh told NanaimoNewsNOW this was the toughest race he’s been in and also the most emotional, since he was sponsored by recently-departed and beloved Nanaimo businessman Tom Harris.

“I went up to (Tom Harris’s) son Tony Harris right after the celebration of life on Saturday and I told him ‘I’m winning that race tomorrow,’” Leigh said after the race.

He thanked the Harris family for all the support they’d given to dedicated tubbers in Nanaimo and the community as a whole.

It was also a grueling one. For two-and-a-half hours Leigh rested on his hip in his super-modified boat, weaving his way through high waves.

“It was like climbing a wall of water,” he said. “Today was a lot of zig-zagging. In the swells you try to pick your path where there’s a dip in the swell. I don’t want to say it’s tactical, but it is in a sense of finding the pockets in the swell.”

This was his second time winning the bathtub race out of six attempts.

Shawn Nadeau, sponsored by Andrew Sheret and Splashes Bath and Kitchen Centre, came second and was right beside Leigh at times.

He raced a stock boat, which he said definitely helped him battle the heavy waves since he could keep a steady pace instead of having to speed up and slow down like a super-modified boat.

There was no escaping the brutal waves though, no matter the boat class.

“It was a battle the whole day. We both sank the boats a couple of times. You manage to keep the throttle on, the engine would go right under the water and fortunately for us they just kept going.”

He said his boat was completely filled with water at least twice and it made him wonder why he’d signed up in the first place.

“I can’t count the number of times where I’m like ‘Why am I doing this?’ Self-endurance and just keeping on pushing and wanting to win the race.”

Race officials said it was one of the longest and roughest races in course history.