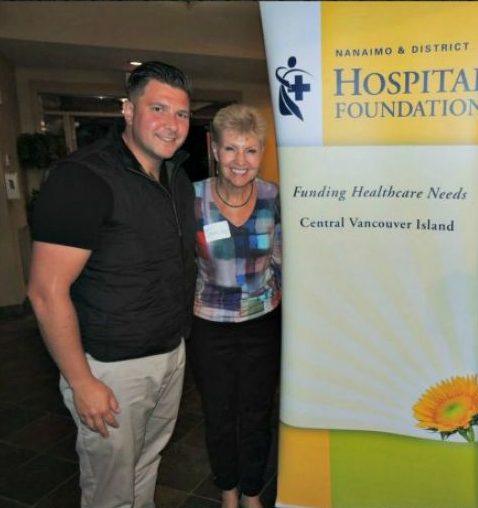 NANAIMO — A new Nanaimo and District Hospital Foundation (NDHF) board member hopes to build on one of the many legacies his father left behind.

Tony Harris is one of four new board members recently appointed to help guide the NDHF, which raises about $3 million annually to outfit five mid-island health facilities with vital equipment.

Harris, whose father Tom was a NDHF board member in the 1990’s, said serving with the organization is a way to carry on the work of his father, who passed away in late June.

“That isn’t lost on anybody and of course I want to honour my dad however I can and whatever way I can,” Harris told NanaimoNewsNOW.

Harris quietly worked behind the scenes on the foundation’s annual Golf For Life tournament committee this year and he planned to surprise his father with his involvement, but said he didn’t get the chance.

Harris recalled watching his father selflessly give his time supporting various causes, which taught him the value of building a stronger community.

“It came natural to him, he loved people, he loved helping people and he loved this community. For him it was just what he did and it comes natural to me as well.”

NDHF board chair Greg Scott said the addition of Harris and three others (Michael Smith, Ryan Wenner and Greg Phillips) to the 11 member board will only add to the foundation’s proud and productive history.

He said some people may not realize how much critical equipment the NDHF has helped fund at Nanaimo Hospital.

“The addition of two new operating, cat scans, the emergency room expansion, palliative care, the list goes on and on.”

Scott said the foundation will be kicking off a Christmas campaign in November.

“We’ll be raising funds for the Nanaimo Regional General Hospital and care facilities between Ladysmith and Bowser. It’s our goal to raise more than $500,000 during that period.”

More information on the Nanaimo and District Hospital Foundation can be found on the organization’s website by clicking here.