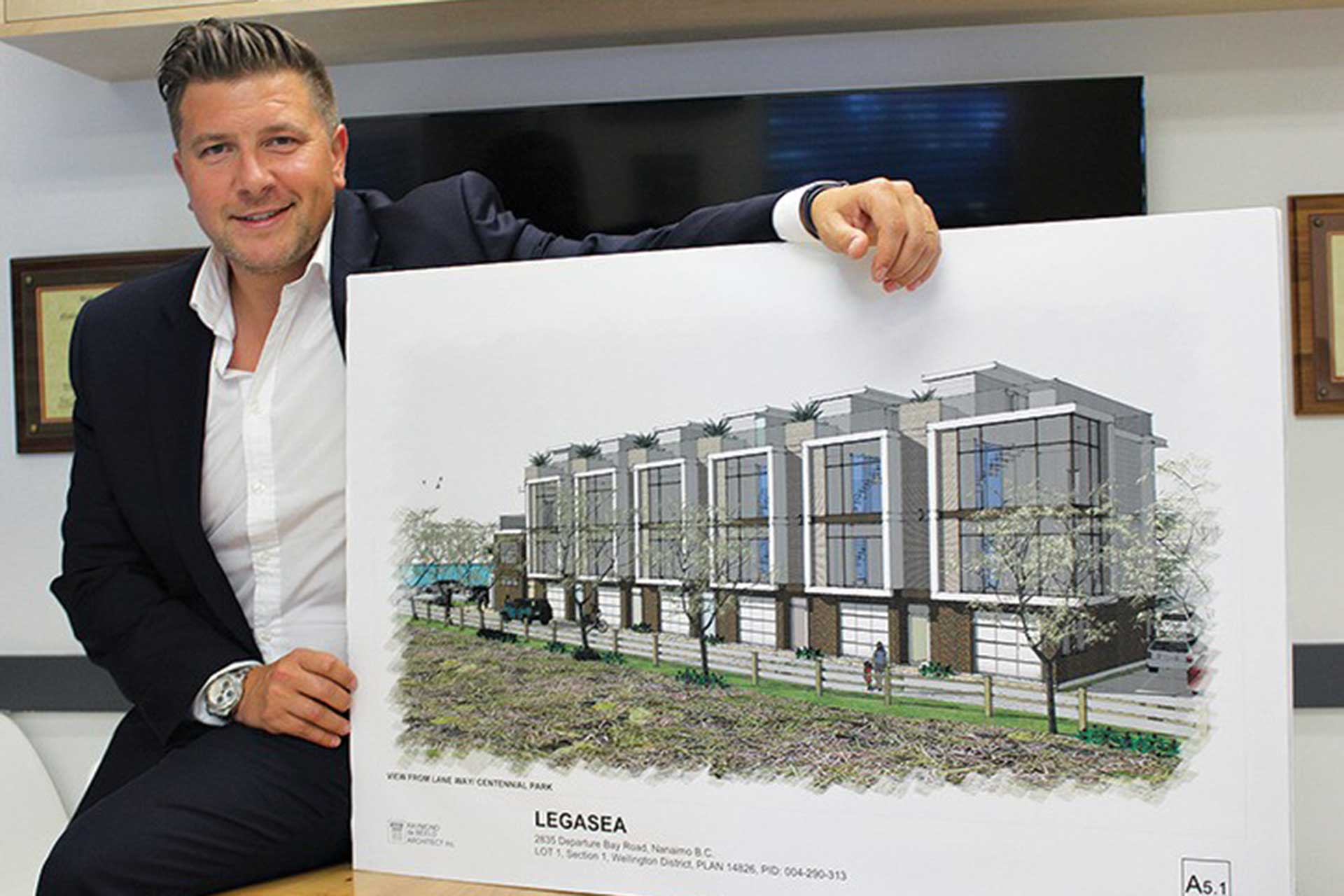 NANAIMO – Tony Harris remembers T-ball games and ice cream at Departure Bay Beach.When Tony Harris thinks about Departure Bay, he remembers spending time there as a kid with his family.He remembers the simple pleasures, like T-ball games and getting ice cream at a popular beachfront shop.“It was a really neat thing to be able to go and do and it is those simple pleasures that we should all have access to,” he said.Harris is the developer behind a brand new oceanfront residential development at 2835 Departure Bay Rd., which he hopes will help transform the area and bring back some of those simple pleasures.“There is something special about Departure Bay,” he said. “It’s not urbanized, it’s a neighbourhood, but it has this amazing beach and park and all these things. It’s very much a family-oriented place, but it doesn’t have much to draw the families down.”Known as Legasea, the development consists of six luxury penthouse-style units that feature three-bedrooms, two-half bathrooms, a private roof top, modern furnishings and other amenities.“It’s going to be an unmatched lifestyle opportunity for the people who buy residences there … They will all have private double-car garages, private elevators, private entries,” Harris said.The development, worth nearly $5 million, also includes a coffee shop and cafe that will accessible directly from Departure Bay Road. A seasonal ice cream shop is also part of the plan according to Harris, who said it’s something he’s always wanted to bring back to the area.“I have always said if I can pull it off I will have an ice cream shop in there because it is not just my memories,” he said.Development in the Departure Bay can be challenging as the area is archeologically sensitive because it was once home to a large Snuneymuxw First Nation population.Harris said he’s worked closely with the Snuneymuxw, the Departure Bay Neighbourhood Association, and the City of Nanaimo to ensure his development doesn’t further disturb the area.“It’s really important that whatever happened down there be well thought out and executed with care and respect,” Harris said.The Legasea foundation will be constructed on a floating slab of concrete instead of the traditional method of excavating the site and pouring a foundation deep into the ground.“It is a pretty cool concept and it is obviously a little bit more expensive and a little bit more involved, but we feel it is the only and appropriate solution,” Harris said.Legasea is the first development project for Harris, who said he believes it will help bring change to the area.“I think when it is built it is really going to set the tone for the future of the Departure Bay,” he said. “I am excited for five to 10 years from now to see Departure Bay just that much more of a community meeting place.”Construction on the project is set to begin later this year.